~ Abbie Betinis (b. 1980) says of Lumen; These two Latin aphorisms are of unknown date and origin, but since the first is a motto for many schools around the world, I thought it would be fun to make the music sound like one part is “teaching” the next by using musical imitation, or echo. Translation: Receive the light and pass it on.  I give that you may give.

~ Amy Lowell (1874-1925) was a poet, performer, editor, translator who devoted her life to the cause of modern poetry. “God made me a business woman,” Lowell is reported to have quipped, “and I made myself a poet.”  Joan Szymko (b. 1957) has created a dazzling choral setting for her poem, A Winter Ride.

~ We’ve put together an Eclectic Mass by pulling single movements out of a varied selection of masses and motets written for women’s voices, and putting them back together to create a new and unique mass. ~ We could not include a program celebrating wise words without a text by Emily Dickinson. Hope is the Thing is the first movement of a suite of five songs on Dickinson poetry by Emma Lou Diemer (b. 1927). The relentless 9/8 meter eighth notes mirror the urgent fluttering of the bird that never gives up.
~ Sunshine and Cloudless Sky is the fourth movement of a larger work for treble choir and string quartet, Anne Frank: A Living Voice.  The text is based on excerpts from The Diary of Anne Frank. Despite all the fears and frustrations she experienced in over two years of hiding from the Nazis, she learned how to survive, to find beauty in small things, and to hold on to her ideals.
~ Even When He Is Silent was commissioned in 2011 by the St. Olaf festival in Trondheim, Norway and written by Kim Andre Arnesen (b. 1980) The text was found written on a wall at a concentration camp after World War II:  I believe in the sun even when it’s not shining. I believe in love even when I feel it not. I believe in God even when He is silent.

~ We open the second half of our concert with Beauty is Before Me, written by Ontario native Penny Blake (b. 1951). This anonymous Navajo text is well known and goes by different titles; The Beauty Way, I Walk in Beauty, and The Navajo Prayer.

~ Composer Philip Silvey (b. 1965) specializes in choral works for treble and women’s voices. Here he has set a text found in Louisa May Alcott’s short story Kitty’s Class Day.  The protagonist quotes the character Portia from Shakespeare’s A Merchant of Venice. I Would Be captures the willful momentum generated by one who aspires to expand herself in light of another.

~ Our last sacred selection is Laudate Dominum by W.A. Mozart (1756-1791).  The tract “Laudamus Dominum omnes gentes” offers further praise to God for the fulfillment of his promise to Israel.

~ Shakespeare is quoted again in Blow, Blow, Thou Winter Wind with music by John Purifoy. In the play As You Like It, Amiens sings about how human insolence and lack of appreciation is more bitter than the winter wind.

~ English poet John Keats (1795-1821) died very young but left behind some of the most beloved poetry of all time. New Zealand composer David N. Childs (b. 1969) has set the first stanza of the ever hopeful poem Fairy’s Song in his composition for treble voices Weep No More; “Shed no tear…the flower will bloom another year.”

~ We found a fresh and newly inspired version of the spiritual This Little Light of Mine to offer as our finale.  Robert T. Gibson (b. 1989) preserved the pureness of this particular melodic version while also giving it a gospel boost helping us to affirm our unique gifts while inspiring us to share them with the world.

Cantabile ended its concert with an encore of the wise words of John Lennon and Paul McCartney, Let it Be. ​We find the lyrics to be particularly meaningful in today's world: 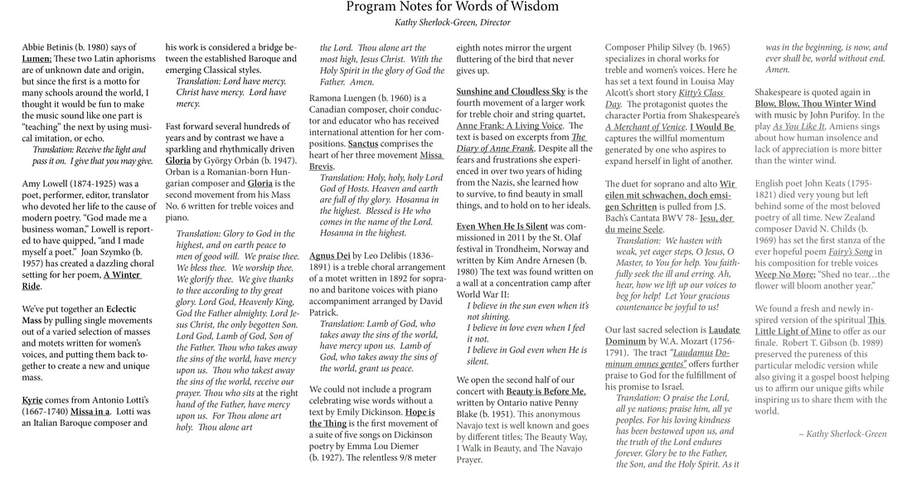